OK, so there's the other side of waiting, which is the getting of what you've been waiting for--a response from the magazine/agent/publisher you have submitted to. Sometimes that response is good, and sometimes it's a rejection.

There are different types of rejections. If you're lucky, you get a letter with a personal note that specifies a particular element of your story/book the editor/agent feels needs work or makes your piece incompatible with them. I've gotten a few of those, and it's actually a good feeling. It lets you know the editor/agent took the time to read your work, and that they feel it has enough merit to be worth a few minutes of their time. Sometimes (oh, happy dance) there may even be an offer to look at the work again if you revise.

At the other end of the spectrum is what I call the "ignore rejection." An agent/editor simply never responds and you are supposed to take that as "no." Fine, I can understand this to a point. And some agents/editors at least post something like, "If you have not received a response from us within 12 weeks assume we are not interested." Not the most polite way of doing things in my opinion, but such is life. What I CANNOT stand, however, is when they do that but don't give a time limit. Oh, look, the sun has super-novaed--I suppose I can now safely assume they're not interested...

In between these two forms of rejection is what is known as the form letter. (Ah, I see from your expression you're familiar with this--hee, hee.) I've received my share of these, of course. Some are more politely written than others, and could ALMOST be taken as a personal response. Others are blunt. "Sorry, not for us." Really.

Today, I got a rejection from a publisher--a form letter. Like some others, this one had my name plugged in, as though they were trying to make it appear less form-y. Well, I have two things to say to that. One--if you're going to do that, make sure the name you plug in is in the same font as the rest of the letter. And, two--ditto goes for the color of the type.

I guess this is a good place to throw in the limerick I wrote some time ago on the very subject of rejections. I've mentioned before that this is the only form of poetry I've mastered, but until now I don't think I've ever posted any. It's not like you can get them published all over the place--especially ones about something as obscure as rejection letters. So, let's (hopefully) end this post with a laugh:

The bitterest juice of the vine
Is a letter that offers decline.
To tears I succumb,
And relinquish aplomb
By drowning my sorrows in whine. 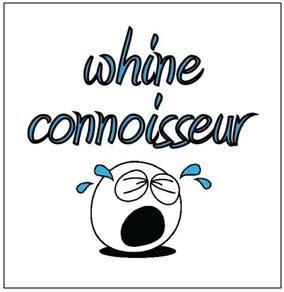 Posted by Kat Heckenbach at 8:15 PM

You can't be rejected if you are not out there, right? You are out there baby, published, and on your way!

Form letter, indeed. I have not received the form letter, but know I will.

Lately, I've seen the sun supernova and decided I can now submit my work elsewhere :) ( to use a quote from a very brilliant published writer friend of mine LOL)

Love your poem...and the cartoon of the connaisour of whine. At least we writers don't have to die to make our work valuable, like painters.

Haha! I love it! And that graphic is way too funny... and accurate!

Thanks KM and KM :). And Janet, you struck on one of the reasons I didn't pursue an art career. Hee, hee.